As of October 2020, this was the FDA’s working list of possible adverse events. The people getting the shots did not get this information (informed consent). 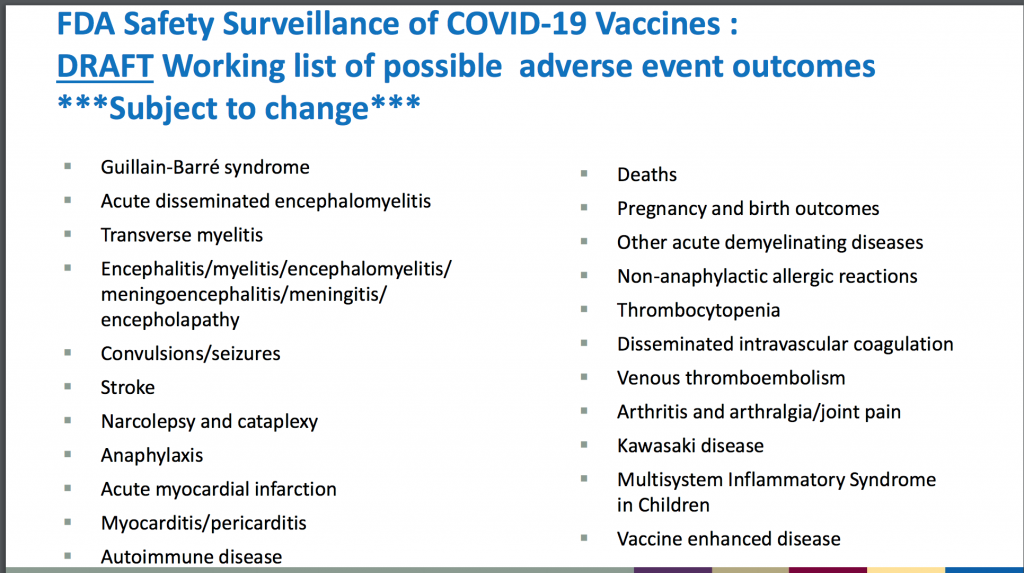 You can see all of the slides here. So, the FDA recognized that some pretty serious diseases could emerge, even autoimmune disease, which wouldn’t happen right away.

“SEVERAL CASE reports of onset or recurrence of symptoms of demyelination after vaccination have raised concerns that vaccines may cause or exacerbate multiple sclerosis (MS) or other central nervous system (CNS) demyelinating disorders. Although the greatest concern has been with hepatitis B vaccine,1–11 there also have been several reports after influenza vaccination12–22 and other vaccines.”

The article goes on to say that these cases, could be “coincidental” and not because of the vaccine, of course, just like people will claim with the Covid shots. Because, it’s common knowledge (sarcasm) that every single death that also had a positive pcr test or a single Covid symptom was a Covid death, but every adverse event or even death post-Covid vaccination is just “coincidence.” Right.

We know that certain polio vaccines are linked to cancer. (Source, Source, Source) The CDC used to have information about this on their site but then scrubbed it. We don’t know if other vaccines lead to cancer simply because nobody is researching this. Like I said in the podcast, we can’t find what we’re not looking for. No evidence (because we weren’t looking) does not definitively determine that these adverse events aren’t happening.

Even the CDC recognizes that vaccines haven’t always had a blemish-free history. They list the following events:

These incidents were recent enough that my children would have had these vaccines–perhaps yours, too? Has a doctor ever mentioned to you that your child’s health issues could have been caused by the very vaccines you were told would save them? Most doctors do not recognize the connection and even deny any correlation, stating, “vaccines are safe.” This history proves that vaccines have not always been safe, nor are they always safe for all people.

If you decide to research the list above (I suggest you do!), note this: while they know that vaccines have caused adverse events and even deaths, they have not recalled every single ingredient that caused these issues. They go on using ingredients today that they know caused issues in the past, and then they seem surprised when the same adverse events arise. Or, they deny the connection.

The vaccine trials included a very short period of reporting adverse events on an app. (Short period meaning a week or two!)

***People who were hurt during the trials are not being included in the data.***

Read the trial information, and subtract the reported data from the original number of participants. Know that if a trial participant reacted to the first dose, they were removed from the trial and their information was not included in the trial data, and the vaccine companies stopped following up on them.

and read this article in BMJ: COVID-19: Researcher blows the whistle on data integrity issues in Pfizer’s vaccine trial

and this article: Woman With ‘Life-Altering’ Injuries After COVID Vaccine Teams Up With U.S. Senators to Demand Answers

The FDA has been changing procedures and definitions.

The Pfizer vaccine did not go through the normal committee process to analyze the safety profile. Also, as has happened throughout this pandemic, the CDC page about safety disappeared. Look what happened when I clicked on this link:

I didn’t find this unusual, sadly. The CDC used to have pages about coronaviruses, vaccines, the process of approving a vaccine, etc., and every single one of these pages has either disappeared or has been redefined.

The FDA doesn’t always get it right!

So many people think that because the FDA is behind these vaccines, that means that they are inherently safe. Yet, daily, there are commercials advertising class action lawsuits against drug companies that the FDA was also behind.

Note the recent recall on CPAP machines and think about how many years people have been using them.

In every pubmed article about the association between vaccination and long-term disease, the conclusion contains a sentence that goes something like this: “Follow-up studies are needed,” or “Future research is necessary.” The problem is, nobody is doing long-term studies on vaccines.

“We learn about a vaccine’s safety during clinical trials before it is licensed, and monitor it continually as millions of doses are administered after it is licensed. We also know there is not a plausible biologic reason to believe vaccines would cause any serious long-term effects. Based on more than 50 years of experience with vaccines, we can say that the likelihood that a vaccine will cause unanticipated long-term problems is extremely low.”

If you or your children got vaccines (I assume you would have been part of the “millions of doses administered,” was anyone monitoring your side effects continually? Was any doctor connecting the dots between symptoms in your teen and the booster shot she got at age ten? No. This quote is a fancy way to dance around the fact that nobody is actually following what these shots are doing to the population over the years.

The source above, Vaxopedia, listed fourteen supposed long-term studies in order to prove that long-term studies are done. Fourteen studies, huh? We’ve been vaccinating kids in the US at least since the first Polio trials in 1935 (and possibly before that) and we only have fourteen long-term studies? Interesting to note, many of these studies were not done in America.

The studies that were done in America were not working directly with patients, they were pulling medical files and deducting information from lab work. In other words, nobody was actually following up with these patients to ask about long-term adverse events. And, these studies are riddled with conflicts of interest, like funding directly from Pfizer.

Let’s face it: if a percentage of the population ends up with a particular cancer from vaccines, the company will only lose money if they do research to prove it. The CDC, FDA, NIH–nobody is looking out for the health of the American people and requiring these kinds of studies. For the drug companies, it’s a win-win if we get sick from their shots. They profit off of the shots (billions of dollars) and then they profit off of the treatment. It’s a no-brainer, if you’re in this to make money (and, they are).

Does the FDA think these data justify the first full approval of a covid-19 vaccine?, Dr. Peter Doshi

“A number of public commenters on record shared anecdotal evidence of trial participants being dropped from studies once they had a reaction, and no data showing vaccine reaction in study publications. In other words, Pfizer (and others) are seeing reactions after vaccines and dropping those participants from the study (or claiming AEs are unrelated to the vaccine) instead of reporting a reaction due to the vaccine.”

ACT NOW AMERICA: The FDA Failed Our Children. Tell the CDC That Proof Of Safety Is Not Negotiable For Children Ages 5-11.

You’re at a theme park, about to try a brand new roller coaster. It looks amazing. It’s been talked about in the news for months, and you’ve been so excited about it.

The theme park knows a wheel is broken and there could be potential danger ahead, but they don’t tell you.

They tell you it’s perfectly safe–and that everyone else is going to do it. They tell you LOTS of people have done it before you and they were fine. (They inflate those numbers a bit, but you don’t know it).

You’ve got some friends and family shaking in their boots on the sideline, this coaster looks bigger and different than any they’ve seen before. They’re shouting at you “Don’t do it!”

But, the majority of your friends are with you–try it! You’ll be so glad you did!

The theme park people are telling you it’ll be fine–you’ll thank yourself later for being so brave! People around the world will think you’re amazing! You’ll even get a sticker when you’re done!

One of the guys who built the ride is off to the side screaming loudly “DON’T DO IT!” but the theme park security drags him off. You brush it off, thinking he was just some crazy old man who wasn’t worth listening to.

You see that there’s potential risk–but they’re telling you it’s so safe and wonderful! And it looks SO fun! Besides, how many people really die from roller coasters? (Ignore the covered up, paid-off data from other well known parks, of course–that’s just anecdotal and can’t be proven.).

So you decide to move ahead with it. You’re at the top of the line, ready to get on the ride and put on the seat belt. They hand you a clipboard with a piece of paper that they want you to sign. It says you cannot hold the company responsible if you are hurt on this brand new, fantastic roller coaster. That if you die because of the new technology, your family won’t get a penny from the company. That if you end up with brain injury or heart attack or broken bones, they won’t help you. You’ll be out of work and suffering. The company is free from any liability at all. But hey, the ride is worth it.

Do you still get on the ride?